Airspy is a plug-and-play device and does not require any particular driver installation on Windows Vista, 7, 8, 8.1 and 10. You just plug Airspy and Windows will download and install the right driver for you. 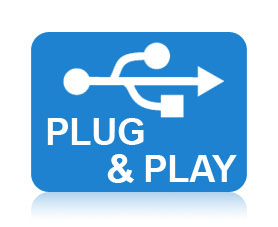 There are exceptions where the original configuration of the PC does not allow the automatic installation of this class of devices. In such case, a driver should be installed manually with the following procedure:

Please don’t. They are not supported.

Airspy was designed by the same people who developed the SDR# software so it’s the obvious choice for running Airspy and leverage all its powerful features.
First, go to the download page and get a copy. Then run SDRSharp.exe and select the “AIRSPY” front-end:

Then next step is the gain configuration. As depicted in this screen shot, there are many gain modes:

The “Linearity” mode is the one you want to start with: 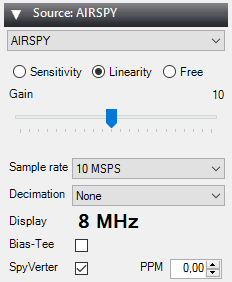 The following fine tuning procedure ensures you have the maximum SNR on the signal of interest while preserving the dynamic range:

In any case, you should make sure the RF noise floor just overrides the quantization noise floor of the ADC, but no more.

Airspy has an option to cover the HF bands: The SpyVerter. It is a low loss, high dynamic range, ruggedized up-converter based on a switching design – the same kind that is used in very high end HF rigs like the Elecraft K3. It offers HF coverage starting near DC up to 35MHz where it overlaps with the standard VHF-L of the Airspy alone. The default software settings allow Airspy to power the SpyVerter via the bias-tee functionality so no extra power supply is needed. Just connect the “IF Output” of the SpyVerter to the RF Input of the Airspy via the supplied barrel adapter.

It is recommended to use the Linearity gain mode in HF. 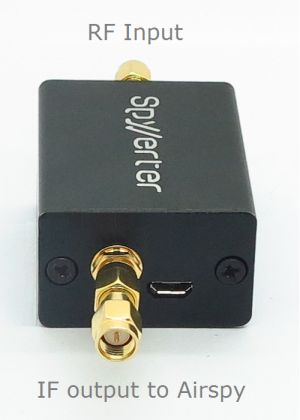 To verify your setup, plug a HF antenna and tune the AM broadcast band. You should get a view like this one: 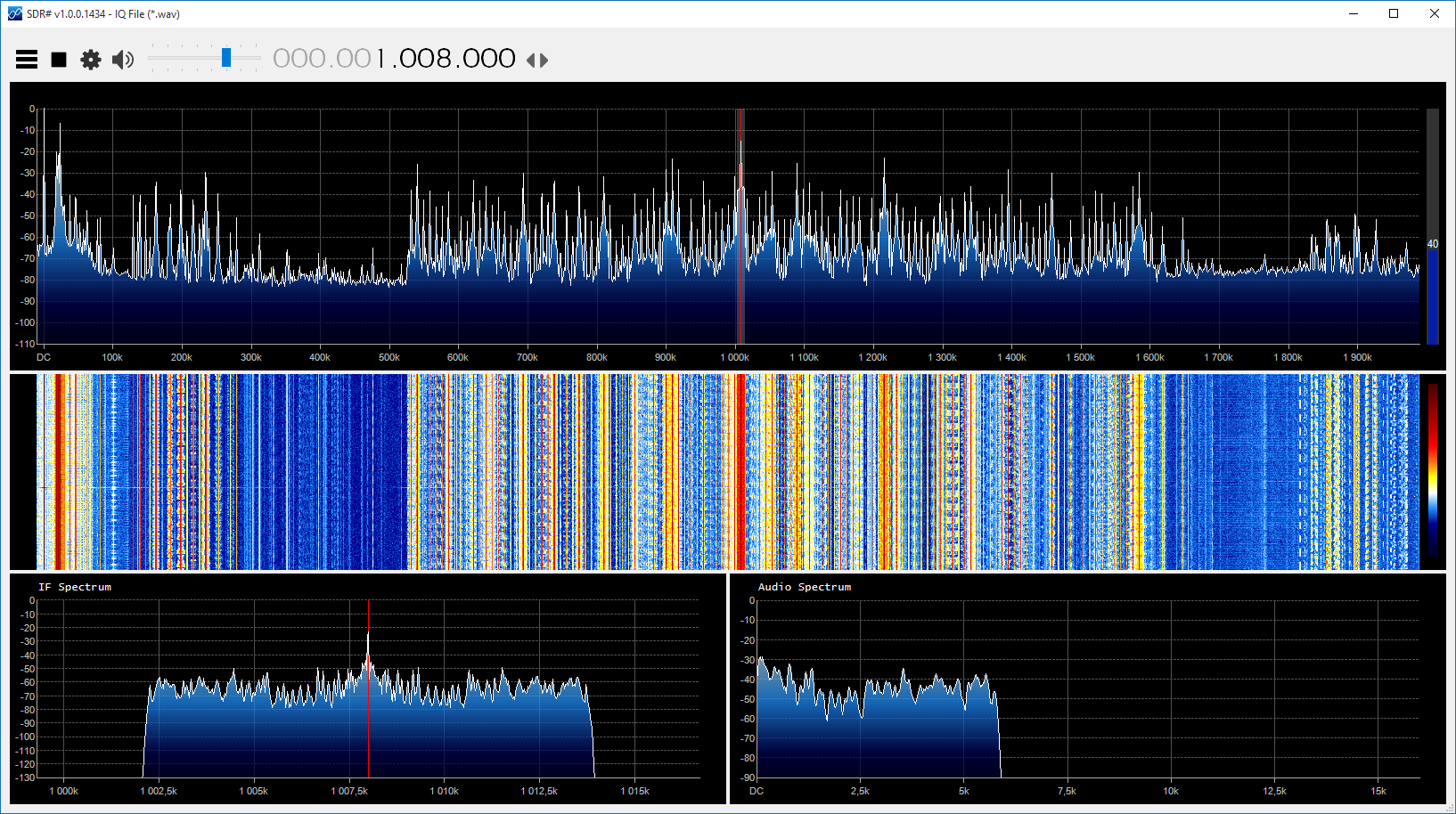 Since revision 1553, we offer a new utility for the Airspy series to convert a Raspberry Pi, an Odroid, or just your regular Windows or Linux PC into a fully featured SDR server.
The SPY Server allows you to connect many SDR# “clients” to the same Airspy or RTL-SDR device over the network.

How does it work?

When only one client is connected, full control (center frequency, gain) is granted. When there are more than one client connected, the center frequency of the device and the RF gain are locked.
The default settings allow using the server in the LAN with optimal latency. The “Full IQ” option allows streaming the entire spectrum from the device to the SDR client (SDR#). If the network bandwidth is not sufficient to handle the traffic, uncheck the “Full IQ” option and the server will only stream the FFT display data and reduced IQ data that it necessary for decoding one VFO. The bandwidth savings allows usage over the Internet, but still requires high speed connection.

The SPY Server comes with a standard configuration file that allows you using Airspy or RTL-SDR directly without an upconverter. If you have many devices in the same server, you can have multiple configuration files and pass the right one as parameter to the executable.
If the SpyVerter is used, the following parameters should be set in spyserver.config:

Edit the configuration file if necessary and double click on spyserver.exe.

First, make sure you are have the latest version of libairspy installed.
Extract “spyserver_linux_x86” and “spyserver.config” from the standard zip, chmod and run.

First, make sure you are have the latest version of libairspy installed.
Download and extract the standard ARM package and run.

You can also use the automated installation script by Rodrigo Pérez which will do everything for you with a single command:
wget -qO - http://airspy.com/downloads/install-spyserver-rpi.sh | sudo bash

What could go wrong in the Linux world? Well, many things (see the GPL sections 15 and 16). Here’s a list of the most obvious ones people reported so far:

You need firmware version 1.0 rc7 or newer to use Airspy as an ADSB receiver. Get the latest update from here:
https://github.com/airspy/firmware/releases
READ the instructions before doing anything.

The latest Raspbian distros come with a new default CPU governor that is not suitable for sustained high performance operation. The CPU will start at a very high frequency (1200MHz), get very hot, then throttle back to a very low frequency (600 MHz). The governor will keep swinging back and forth between these two extremes and the USB controller will drop whole packets, which could affect both the number of decodes and the MLAT timing.
The following settings will force the “performance” governor at a much more acceptable CPU frequency for sustained operation without causing excessive heat and without sacrificing the performance of the decodes.
If very high MLAT reliability is required, the following switche should be applied to the decoder:
sudo /home/pi/airspy_adsb -l 30005:beast -x -m 12
This will run all the decoding in one core using 5 signal phases instead of 10, which requires half of the CPU usage, while still being very accurate for MLAT.
Additionally, we recommend to put these lines in /etc/rc.local :

Then append these lines to /boot/config.txt :

The whole process for setting up a high performance ADSB receiver has been simplified. For the Raspberry Pi 2 or 3, Odroid or Pine64 boards, you can use the following commands:

The easiest way to integrate Airspy into an existing FlightAware PiAware is described here.
If you don’t need all the details, you can just use this neat installation script by FlightAware member @wiedehopf. This script works for FlightAware SD Card images:

Once you have your decoder up and running, you can use any aircraft tracking software that supports the Beast or AVR formats. 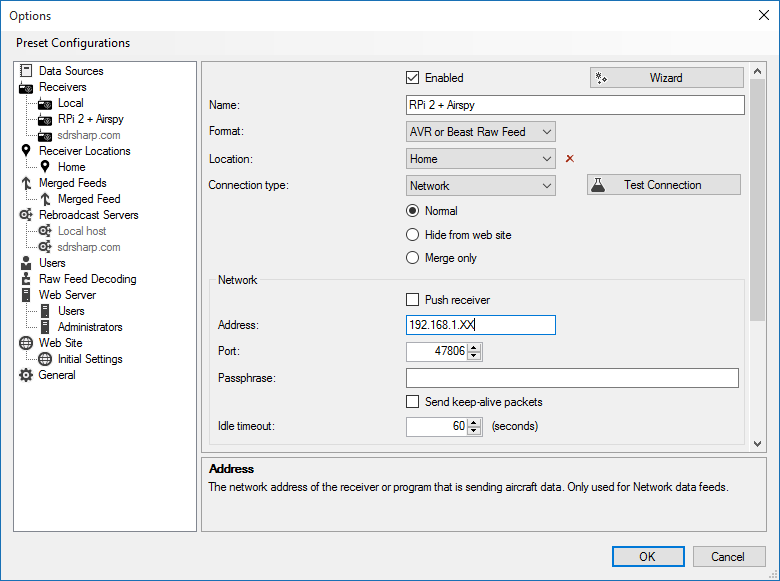 For Plane Plotter, you can use this configuration: 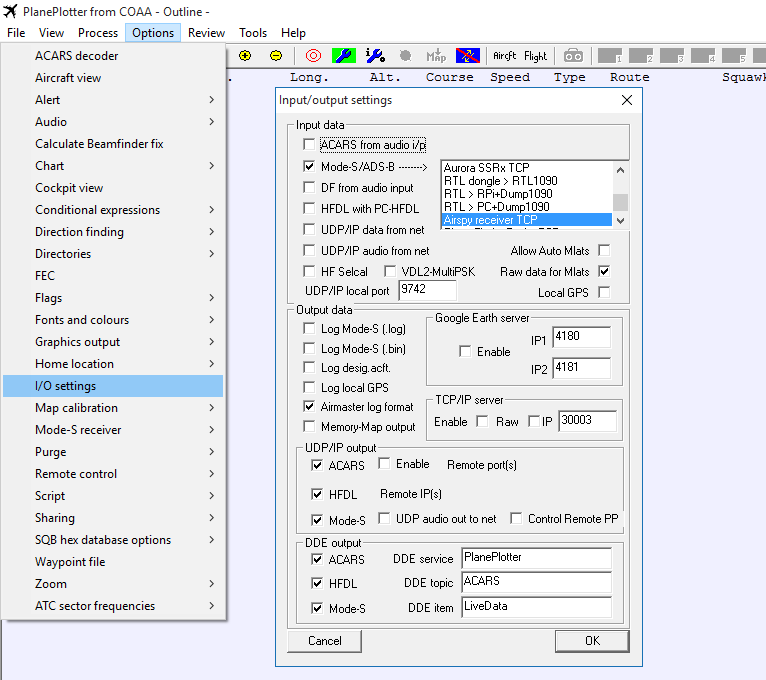 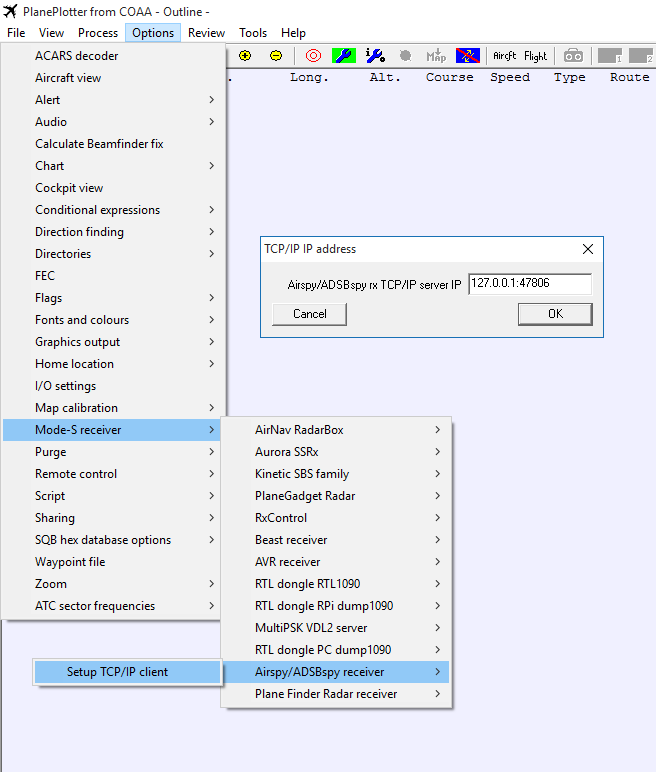 The effects of oversampling and decimation

The decimation option allows you to trade some of the instantaneous bandwidth to get more bit resolution, and hence, lower quantization noise. The basic rule of thumb is 3dB every time you divide the bandwidth by two. So, decimation by two gives you 3dB, decimation by 4 gives you 6dB, by 8 gives 9dB and so on.
To further leverage the effects of the decimation, you can also readjust the gain using the same procedure described above. A slight saturation of the ADC gives you more SNR after decimation. So basically, when you use a higher decimation rate, adjust for higher gain and vice versa.

In some cases, one may need a very low noise figure. For example, some satellite communication systems require a front end with a noise figure as low as 0.2dB. In such case, using an external preamplifier near the antenna system can improve the overall operation. The Bias-Tee option allows powering such a preamplifier directly from Airspy by injecting DC at 4.5v. Of course, such a preamp should have its own biasing system to extract the DC and inject the amplified RF signals. The current budget is limited to 50mA, so that’s enough to run most of the modern MMICs.
Another use case one can imagine is to switch between antennas using that bias signal or even power down-converters for higher bands OR up-converters for LF and HF, like the SpyVerter mentioned above.

Starting from June 2016, Airspy R2 units are calibrated in the factory up to ~0.05 PPM. This calibration is written in a different memory location than the one used for the firmware, so upgrading the firmware won’t delete it unless you do it by yourself.
The procedure to recalibrate a unit is as follows:

Note that this procedure requires firmware version 1.0-RC9 or better.

We created a set of command line utilities to help troubleshooting the performance problems.