We did it again! 2019 was a year of revelations and discoveries for us. Short after launching our ground-breaking HF receive technology incarnated by the Airspy HF+, we worked on polishing and improving the overall performance while skimming everything unnecessary in order to reduce the cost to a minimum and democratize High Performance HF receive with a truly affordable radio.
Our unit got a glowing review from the well respected WRTH in their 2020 edition. The competition was fierce, but here we are!

“A conventional high-grade HF receiver would be expected to exhibit a BDR of somewhere in the region of 110-120dB. Our RA3791, for
example, has a BDR of about 118dB at 10MHz and is slightly better than that at higher frequencies. Rather oddly the claimed figure of 110dB for the Discovery appears to be very conservative. Although it is a difficult parameter to measure accurately and requires high-grade test equipment, we estimate that the true figure is around 116dB at 10MHz.
Overall, we find it remarkable and very commendable that a small and relatively unassuming plastic box should turn out to be a radio receiver with a spectacular combination of performance and versatility. And at its very affordable price point, the ratio of price to performance of the Discovery could fairly be described as stratospheric. It is highly recommended. ” 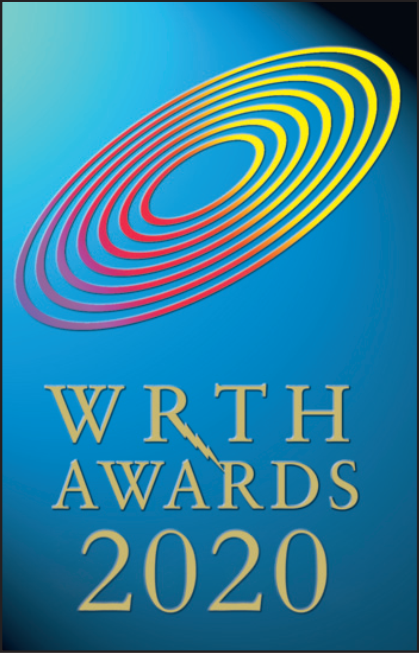 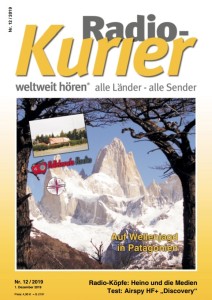 A Heavyweight at 30g: The Airspy HF+ Discovery, by Nils Schiffhauer

Nils Schiffhauer, DK8OK is used to review top end SDR solutions for the most prestigious specialized press outlets got a chance to try an Airspy HF+ Discovery and he wrote an extensive article for Radio User Magzine. The extensive review is brought to you courtesy of Radio Enthusiast.

” Just another SDR? Wait, this beast is different – not only in size and price but also in terms of its concept and performance. In common with some former models of AirSpy SDRs, the new AirSpy HF+ Discovery model (henceforth: ‘Discovery’) is a joint venture of Youssef Touil and his team at the Chinese ITEAD studio and ST Microelectronics. This smart team has already developed, for example, the ground-breaking AirSpy HF+, which is widely considered to be the top performer in its class. The Discovery continues this success story.
The Discovery shines with less noise, and, astonishingly, less crackle. In at least 80% of these diffi cult cases, intelligibility with the Discovery is clearly better. With very few stations, this receiver will even make the difference between understanding the identification of a station and not copying it. In August, I also tested the Discovery with the most ‘demanding’ band, the Very Low Frequency range (VLF). Here most SDRs – and certainly the majority of budget SDRs – reach their limits, lacking sensitivity and filling up the band with internally-generated signals. Thanks to a newly developed input section to start at even 500Hz, this receiver shows outstanding strong and clean signals from as far as the US Navy in Australia. ” 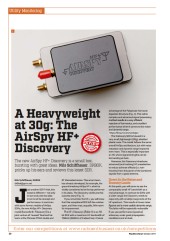 Since the publication of the excellent review by Fernando Duarte, we had to up-scale our logistics for delivering the much awaited Airspy HF+ Discovery. Larry Van Horn had a pre-order placed at Airspy.US and planned an independent review for The Spectrum Monitor magazine. A few weeks after receiving his unit, his words were heart warming:

” Most the low-priced SDRs have never been preselected, mostly for cost reasons, and will suffer strong signal overload especially in high RF areas (urban/metro areas). Without exception, these devices usually have major problems with the antennas that radio hobbyist use. They overload very quickly, which makes serious reception on long, medium and shortwaves rather difficult. The HF+ Discovery is the big exception. Based on our testing, the Airspy HF+ Discovery has no equal at its price point. You will find world-class performance and an amazing piece of hardware wrapped up in a package smaller than a matchbox. The Airspy line has a very fine reputation in the radio hobby. In reviews published in Gayle Van Horn’s 2018 Global Radio Guide and the 2019 World Radio TV Handbook, the Airspy HF+ received high marks by the testers and a “Best Value” rating. ” 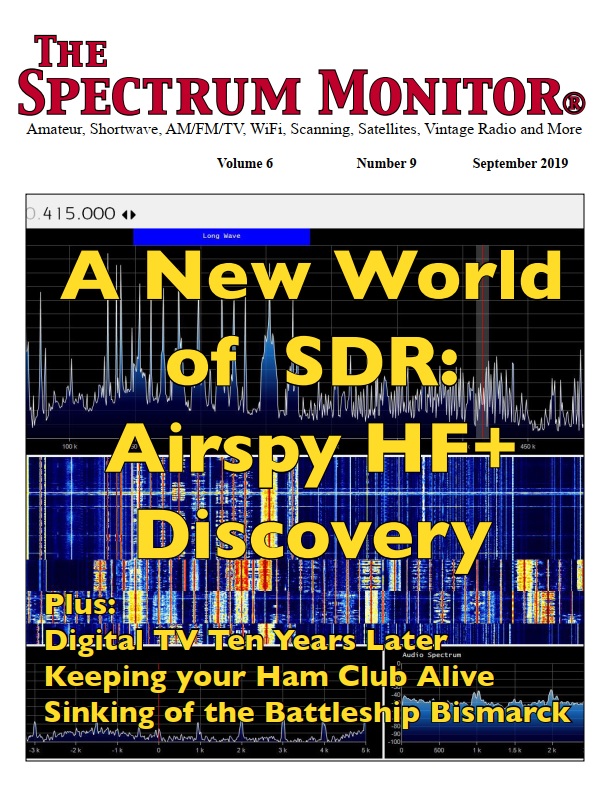 After the successful launch of the Airspy HF+ (Dual Port) last year, we received a lot of requests to bring this new level of performance into a smaller form factor. Not only we reduced the size of the HF+ by more than half of the PCB surface, but we also developed many filtering options and dynamic range enhancements to meet the requirements of the most demanding professionals and monitoring enthusiasts. Fernando Duarte, the owner of Fenu-Radio.ch followed this development since the beginning and helped defining the performance standard over multiple R&D iterations. Here’s what he says about the Airspy HF+ Discovery…

” The Airspy HF + Discovery delivers a head to head race with one of the best SDR! And he can keep up. Striking is the very low noise, which ensures a relaxed listening. In some situations, he outperformed the Winradio G33DDC in terms of low noise and sensitivity. On usual hobby antennas, it delivers exceptionally good reception on VLF, long, medium and shortwave with minimal overloading symptoms. Also the VHF / VHF range gave good results. With its preselection and sophisticated software, Airspy offers with the HF+ Discovery the best tuner-based SDR for shortwave listening for little money. ” 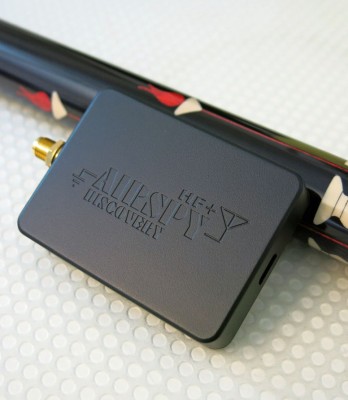 Early this year, we were contacted by the WRTH gentlemen who asked for an Airspy HF+ unit to review. A few months later, we were surprised by the award!
Basically, they took our word for it and tested the Airspy HF+, first using lab instruments, then they compared it to a Racal RA3791 in severe band conditions that other reviewed “budget” SDRs struggled to handle.
Here’s what they say…

” We carried out some tests on the amateur 7MHz band when a major contest was in progress and some extremely strong local signals were encountered. Using a full-size 7MHz three-element Yagi antenna at 30m (90ft) we expected major problems of overloading and spurious responses but found none whatsoever apart from very occasional and small increases in the local noise floor when an extremely strong local CW signal was encountered. This was a remarkable performance for any receiver, let alone a low-cost SDR, and one which many high-grade professional receivers from an earlier era would have found difficult to emulate. Another interesting point to emerge from the listening tests is that the Airspy sounds remarkably ‘quiet’ and unfatiguing in use, unlike many SDRs in its overall price class. This is presumably the result of careful design of the DDC and audio system. ” The results were not surprising for the folks who already tried the devices in question, but have shown once again how Airspy shines with its top notch performance. The shootout demonstrated how our receiver architecture is keeping an excellent performance on all bands where the other competitors encountered imaging, aliasing and severe loss of sensitivity.

Bob Grove W8JHD of The Spectrum Monitor fame discovered the Airspy R2 and the SpyVerter a month ago, and wrote an excellent review on The Spectrum Monitor Magazine. Bob confirms what the lab figures say about Airspy and place it among the high performance communication receivers that shape the SDR scene today. Reprinted with permission from the publisher.

” The digital revolution began when it became evident that analog computers had limits. It gradually evolved into consumer electronic specialty markets like sound and radio, starting at low audio and IF frequencies, then slowly growing higher and higher with the demand of the marketplace. Penetrating even the toy market, digitization of our lives became most apparent a few years ago when we all learned that our old analog TV sets wouldn’t work anymore to receive Over-the-Air TV signals.
Most recently produced and receiving well-deserved attention is the Airspy, with 24-1750 MHz continuous fre-quency coverage. And, if you’d like frequency coverage all the way down to audio (about 1 kHz depending on the band-width setting), their accessory SpyVerter provides just that. Its typical image-free span is about 8 MHz, a nice spread for active frequency hunting. ” Andy Talbot G4JNT of the RSGB took his Airspy apart and probed its spectral purity, strong signal handling capability as well as the ability to lock to external clock references. His verdict was clear:

” The Airspy is a natural progression in the development of software defined radios (SDR) that offer an extensive tuning range simultaneously with useful wide-band instantaneous frequency coverage. It was designed by the writers of the popular SDR-Sharp (SDR#) software to work with that and to address the lack of performance of the existing mainstream cheap dongles.
The Airspy is a robust, well made little unit that offers a wider frequency span and tuning, better dynamic range and fewer spurii than the low cost dongles. It is unique in its ability to take in an external reference signal and, when the absolute calibration issues are finally sorted (and it is ‘only software’) will offer a very powerful accurate frequency detection and calibration tool too. ” 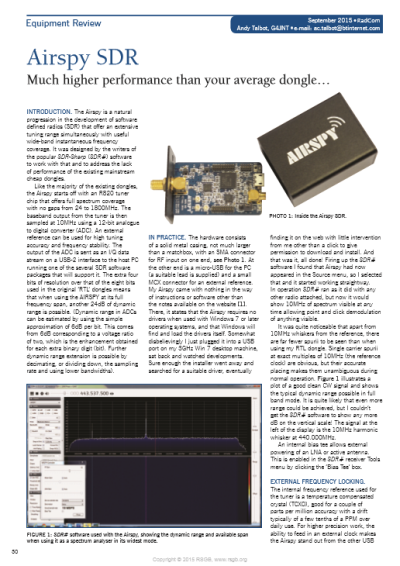 Mike Richards wrote an extensive review of the Airspy R0 where he details his findings. I’ll take his word for it: We have got a hit! The PDF article is provided courtesy of PW Publishing Ltd. Thanks Andy!

” The appearance of the FUNcube Dongle and RTL-based software defi ned radio (SDR) receivers has allowed many listeners to gain access to wideband coverage at a reasonable price. However, designers are now looking at how to make use of the vast amount of new, low-cost technology that is currently available to build the next generation of SDR receivers. The new Airspy certainly fi ts into that category because it is extremely compact and offers a 10MHz receive bandwidth over a tuning range from 24MHz to 1.80GHz with no gaps. What is more, it lacks the central spur that has been a feature of many of the cheaper designs.
The Airspy is a very welcome new SDR receiver that is backed with a host of advanced features. The combination of the 10MSPS sample rate and a 12-bit ADC makes the Airspy a particularly attractive proposition. Even if you do not have a fast enough PC for the 10MSPS rate, the 2.5MSPS setting still provides very good performance and a 2.5MHz tuning band, which is more than most SDR receivers.The Airspy combined with SDR# gives you an immensely powerful receive system at your fi ngertips at a very attractive price. ” 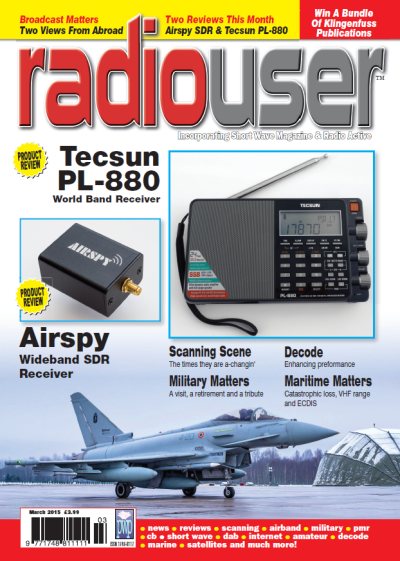 How to Spy on Computer Monitors | TempestSDR Tutorial (with an Airspy)

5 Cool Things You Can Do With An AIRSPY SDR Receiver

UHF Satcom Transponders Close Up on the Airspy SDR

Airspy SDR as a Network Analyzer using for Antenna Characterization